The extensive structural and decorative ironwork on a 1927 "Latin Colonial" mansion located in the River Oaks section of Houston, Texas, has been protected from corrosion by ZRC Cold Galvanizing Compound.

Designed by noted architect John F. Staub, the residence boasts many fine cast-iron details influenced by the architectural stylings of New Orleans and the Gulf Coast areas. The owner, wishing to decrease continuous maintenance costs, specified ZRC to preserve the ironwork as part of a major restoration project.

Flexibility of a One Component System

McLean's Blacksmithing, Inc. of Galveston, Texas, was contracted to handle the painting and restoration of all structural and ornamental ironwork at the mansion. Doug McLean, president, recommended ZRC for the project based on his successful experience with the product. In addition to its galvanic protection, ZRC provided specific application benefits, including the ability to apply the zinc-rich primer, then move on to another location, going back in a couple of days to paint over the original area. This flexibility also made it easy to use two coats in spots that were badly rusted.

"In other applications," McLean explains, "we have found that epoxy alone only lasted four or five years.ZRC extends the service life. In addition, it requires no blending. Since it is a one component primer system, we can use it, close it and go back to it at a later date.

"Of all the painting systems I have used to protect ironwork in the past ten years," continues McLean, "ZRC topcoated with epoxy works the best-even in highly corrosive, humid environments."

Structural and ornamental ironwork at the River Oaks mansion protected by ZRC includes: decorative grilles around the windows of a glass-enclosed sun porch, balcony, lattice-work, metal staircase, bay windows, doors, grilles and railings on the entryway porches-as well as on a 35-foot metal balcony overlooking the circular driveway.

The condition of the ironwork at the inception of the project ranged from fair to badly rusted. Surface preparation involved the removal of multiple coats of old paint and rust. A needle gun was used to meet SSPC-SP11 Surface Preparation Specification No.11 Power Tool Cleaning to Bare Metal. Once this was accomplished, surfaces were wire brushed and then a series of small picks (developed specifically for this project) were used to remove small traces of paint found at movable joints and other locations where moisture tends to accumulate.

ZRC was then applied, followed by an epoxy midcoat and black urethane topcoat with a satin finish. The urethane topcoat was chosen for its ability to withstand chalking during long-term exposure to sunlight. The ZRC/epoxy/urethane system is expected to provide lasting rust protection, as well as meeting the aesthetic and maintenance requirements of the owner. 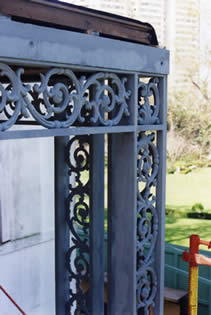