New York City is considered by many to be the cultural capital of the United States. Certainly, the "Big Apple" features more public works of art than any other city in the nation. ZRC plays an important role in preserving one major piece of artwork for the city's residents.

A Celebration of National and Ethnic Groups

New York's Governor Smith Housing Authority complex is the site of "Orbital Connector," a massive steel environmental sculpture by the renowned artist Hera. The sculpture features a series of six steel rings - each thirteen feet in diameter - made up of openwork lettering spelling out the names of cities in China, the Caribbean, Europe and the United States, identifying the origin of the residents of the area. The rings are pierced by a 60-foot steel arrow, which points directly to China.

"Orbital Connector" is not tucked away in a musty museum, but is displayed proudly in a grassy area in the middle of one of New York's most cosmopolitan housing areas. In addition to being subjected to eighteen seasons of New York weather and corrosive atmospheric conditions, "Orbital Connector" often serves as a playground for neighborhood children.

ZRC to the Rescue

To protect "Orbital Connector" from the elements, Hera carefully selected ZRC Galvanizing Compound as the rust prevention coating for the entire sculpture. ZRC was not only used to coat all welds, but covers all exposed metal surfaces.

After eighteen years of wear and tear, "Orbital Connector" shows no sign of corrosion, rust or rust creepage. "The excellent condition of the Orbital Connector after 18 years confirms that ZRC was the perfect choice! I have two other galvanized steel sculptures that could definitely use a coating of ZRC now," noted Hera.

What is the Secret of ZRC?

Why did ZRC work so well? ZRC acts as both a physical and galvanic barrier against contaminants and oxidation. As the zinc content of ZRC is sacrificed to prevent rust from starting, insoluble corrosion by-products are formed. These by-products fill voids and pores in the zinc primer film, forming an insoluble barrier to further protect against attacks on the zinc film and steel substrate. Many of these byproducts also tend to inhibit the rusting process by increasing the pH level.

Unlike ordinary paint or lesser galvanizing compounds, ZRC continues to provide protection against rust and rust creepage even if the protected surface is scratched to the bare metal. The zinc forms a layer of insoluble zinc salt over the exposed area, "healing" the break and providing protection against corrosion. Due to these properties, ZRC is often specified for applications that require protection against constant exposure to harsh weather, changing conditions and corrosive atmospheric circumstances.

The citizens of New York City and art lovers around the world will continue to enjoy the splendor of "Orbital Connector" for years to come, thanks in large part to ZRC 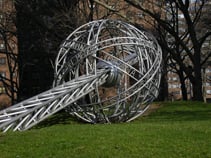 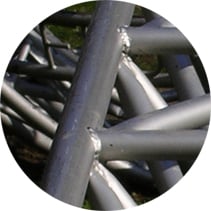