On the rugged northern coast of the main Japanese island of Honshu sits Mitsubishi Materials' Aomori Shiriya Cement Plant, one of the Pacific Rim's busiest and most productive building materials producer. The harsh climate of the North Pacific includes cold, wet winters, driving rainstorms and constant exposure to salt sea air. The resulting maintenance problem at the Aomori Shiriya plant was a constant struggle with rust and corrosion in the steel structures and supporting beams dotting the site. In a running battle against rust, plant maintenance personnel were forced to repaint (with up to five coats coverage to 5-6 mils thickness) all exposed steel every three years -- an accelerated painting program that was both expensive and exhaustive.

A Call for Galvanic Protection

In 1990, the Aomori Shiriya plant painting rotation included a new player-ZRC Cold Galvanizing Compound. In conjunction with ZRC's distributor in Japan, ZRC Japan Corp., Tokyo, the Aomori plant maintenance engineers decided to make a concerted effort to slow the spread of rust throughout the plant site. Their hopes were pinned on ZRC's true galvanic protection.

All exposed surfaces were sandblasted down to white steel, then given just two coats of ZRC (applied by brush and airless spray), to a thickness of approximately 4 mils. No epoxy topcoat was applied-the ZRC was left to fend for itself against the worst the North Pacific could throw against it.

The Results Are In

An official inspection conducted in May, 1994, revealed astounding results. The surfaces coated by ZRC showed no exposed rust. All that was visible were small white zinc hydroxycarbonate salt deposits, proof that ZRC was in action and providing constant galvanic protection for the steel. At a time when a complete repainting would have normally been long overdue, no rust removal or corrosion maintenance was necessary throughout the entire Aomori plant.

In comparison, a steel structure adjacent to the Aomori Shiriya plant, which was painted in the former method at the same time ZRC was applied, was inspected along with the cement plant. The verdict? It was "mostly rusted."

Zinc is the Secret

Why does ZRC outperform other coatings and paint under all conditions? ZRC's 95% zinc content provides galvanic protection that acts as a physical barrier against rust and rust creepage. The zinc content of ZRC is sacrificed to prevent rust from starting, forming insoluble corrosion by-products. These by-products fill voids and pores in the zinc primer film, forming a barrier to further protect against attacks on the steel substrate. These by-products also inhibit the rusting process by increasing the pH level.

ZRC will continue to protect against rust and rust creepage if the protected surface is scratched to the bare metal. The zinc forms a layer of insoluble zinc salt over the exposed area (thus the "white salts" visible in the Aomori inspection), "healing" the break and providing protection against corrosion. Due to these properties, ZRC is often specified for applications in highly corrosive and environmentally challenging environments. 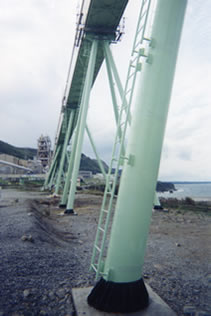