Which Coating Would You Trust to Prevent Rust?

This report was produced to illustrate the anti-corrosive properties of ZRC Galvanizing Compound, in a direct comparison with four other coatings which are frequently used to protect steel from corrosion.

IThe American Society for Testing (ASTM) B117 “Standard Method of Salt Spray (Fog) Testing” employs a fog chamber into which are placed metal panels pre-coated with the paint-systems to be studied. A solution of 5% sodium chloride/95% distilled water is atomized at 95 F, and the resultant fog is allowed to settle on the test pieces. The test is normally run continuously until failure, that is, an unacceptable accumulation of red rust. We chose to terminate the test after 1,500 hours.

These samples were prepared according to ASTM D609 “Standard Methods for Preparation of Steel Panels for Testing of Paint, Varnish, Lacquer and Related Products,” using solvent-wiped, cold rolled steel panels, ZRC was applied by conventional spray at a three mil dry film thickness. The other coatings were applied by conventional spray according to their manufacturers’ recommendations. 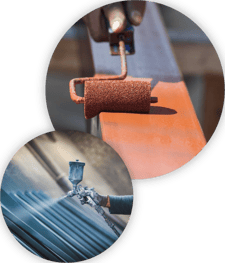 In addition, the samples for the test were vertically scribed to expose bare metal in hopes of increasing the severity of the test by initiating corrosion at the damaged (scribed) area.

The results of the 1,500 hour test are as follows (please refer to the photograph above):

This modern coating is used in applications where the surface can only be marginally prepared and is many cases in contact with water, such as water tanks and piping. It normally exhibits good adhesion and moisture resistance. This panel suffered severe blistering and heavy corrosion at the scribe.

A two-part system requiring mixing before use, this coating is known for its solvent, chemical and abrasion resistance, and is a favorite high-performance coating for a variety of heavy industrial applications. This panel had sever scribe rust and rust creepage, but overall good performance.

This has been the primer of choice for the military and general industry for many years. Its chromate content makes it highly toxic and is forcing its retirement. This panel showed good overall performance, but exhibited rusting and rust creepage at the scribe.

This primer was a long-time industry favorite found in bridge and highway work, where it had been the preferred primer for non-abrasive blast cleaned steel. Due to its high lead content (considered highly toxic), its acceptance and use have been phased out. This panel exhibited severe blistering with some delamination and extensive rust at the scribe.

ZRC’s primary applications include repairing damage and welds made to hot-dip galvanized metal, touch-up of welds on structural steel and complete galvanizing of fabrications where hot-dip galvanizing is too expensive or impractical. Use of ZRC is widely accepted by many diverse industries (i.e. aerospace, construction, fabrication, manufacturing, highway, etc.). This panel exhibited overall zinc hydroxycarbonate salt formation typical of galvanizing, but no corrosion on the general panel surface or in the scribed area.

The results above illustrate clearly the difference between inhibitive primers (D,E), barrier-type paints (A, B) and a sacrificial zinc-rich primer (C) . In general, the barrier-type and inhibitive paints will give steel fair to excellent corrosion protection, heavily dependent on the individual formulation, until the coating is chipped, scratched or otherwise breached. Rust and rust creepage will quickly form in unprotected areas. 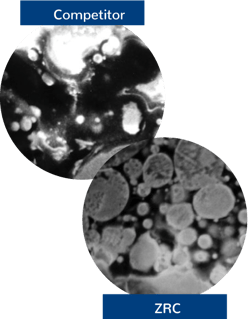 Sacrificial zinc-rich coatings, such as ZRC (which contains 95% zing in the dried film - the highest level of zinc loading available on the market), initially protects steel by wholly galvanic action. When zinc is in direct contact with steel in the presence of an electrolyte (moisture or other aqueous solutions), zinc ions go into solution, liberating electrons which cause a current flow into the substance to prevent the steel ions from going into solution (rust). Test results indicate that the higher the zinc loading and the more zinc present on the surface, the better and longer the anti-corrosive performance.

As the zinc is sacrificed, zinc hydroxy carbonate and other zinc salts are formed in the film, making it denser and reducing its conductivity. Thus, galvanic action of the zinc continues until the film is converted into a dense, impervious barrier resistant to weather, water, and fume attack. If this coating is damaged, as evidenced by the scribe test, fresh zinc metal is readily available to provide renewed galvanic action.

Thus, the protection  afforded by ZRC is two-fold: cathodic protection and barrier protection. Essentially, it is a self-healing film, as any damage to the barrier initiates renewed galvanic action.  Download Study!

Get the latest updates delivered straight to your inbox!